America Is Under Attack: September 11, 2001: The Day the Towers Fell 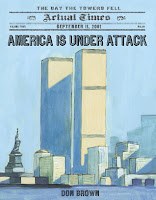 America Is Under Attack: September 11, 2001: The Day the Towers Fell
by Don Brown
Actual Times series
Roaring Brook Press (an imprint of Macmillan) 2011
ISBN: 9781596436947
The reviewer purchased a copy of this book to review.

How does a country deal with tragedy? How do parents and teachers explain unfathomable events to children? Following the terrorist attacks of September 11, many adults attempted to shield children from seeing the images of the planes flying into the towers. We turned off the news when footage was broadcast, and we avoided discussing the events in the presence of our kids. The country was on edge, and we didn't want to scare our children.

Literature is an effective way to broach a tough subject with children. A number of children's books were published shortly after the events of 9/11 as a way to help children understand what had unfolded and to highlight good deeds by people who wanted to help a wounded country.  One book that comes to mind is Fireboat: The Heroic Adventures of the John J. Harvey by Maira Kalman, published in 2002. Fireboat told the true story of a retired fireboat that was brought in to help put out the fires on Sept. 11, 2001.

The children of 2001 are now grown, and the majority of children in elementary school today were born after 2001. With the 10th anniversary of Sept. 11th now upon us, a new children's book aims to describe the devastating events to young readers. America Is Under Attack by Don Brown outlines the tragedy in a concise, chronological, narrative style that elementary school children will understand. The author pins down the events to the exact minute:

"Massive flames spewed from the tower. Wreckage rained down on the street. It was 9:03 AM, seventeen minutes after the strike on the North Tower. People now understood the earlier crash was not a freak accident, but a deliberate attack."

Brown's watercolor illustrations convey the serious tone of the story. One page shows black smoke pouring out of one of the towers while people stand on the building's steel beams waving for help. Shades of black, gray and dark blue are used to illustrate a fallen firefighter as he is carried away from the wreckage by four firefighters as others look on and salute. Readers will relate to the gravity of the story through these illustrations.

Brown does not gloss over the events that may be difficult for children to hear, but he also doesn't go into details that may scare children. He strikes just the right balance. An author's note in the back includes facts about the number of deaths in the World Trade Center, the Pentagon, and the Shanksville plane crash. A bibliography and list of source notes are also located in the back.

America is Under Attack fits the needs of many grade 3-6 libraries and classrooms. The book will educate a new generation of readers about September 11th without exploiting a tragedy that is still raw for many adults.


Teacher's Guide to America is Under Attack:
http://www.teachervision.fen.com/discussion-guide/printable/71105.html?detoured=1

America Is Under Attack was also reviewed by:
100 Scope Notes
http://100scopenotes.com/2011/08/15/nonfiction-monday-america-is-under-attack-by-don-brown/
Posted by nonfictiondetectives at 6:32 AM