Inside Volcanoes by Melissa Stewart 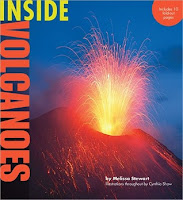 Inside Volcanoes
by Melissa Stewart
illustrations by Cynthia Shaw
Sterling Children's Books, 2011
ISBN: 9781402781623
The reviewer obtained a copy of the book from her school library.

Volcanoes are a "hot" topic in my library. I like to use volcano books when I introduce research skills to younger students. The students are so enthused and curious about volcanoes, it makes generating questions and looking for answers fun for them and for me.

Melissa Stewart's newest nonfiction book, Inside Volcanoes, is full of interesting facts and amazing photographs that will entice even the most reluctant reader to pull up a chair and explore this book from cover to cover.

Inside Volcanoes is part of the Inside! series that features numerous fold-out pages. Arrows on the bottom of the pages direct readers where to fold out the pages. Stewart uses clear and concise language to describe different kinds of lava, different types of eruptions and how lava creates various landforms.
"When lava gushes out of a volcano, it's a sizzling 1,300 to 2,200 degrees F (700 to 1,200 C). That's six to ten times hotter than boiling water!"

Various volcanic eruptions around the world are also described, and Stewart incorporates first hand accounts from witnesses. Stunning photographs of volcanoes erupting will capture the attention of readers. One of the fold-out pages shows "before" and "after" photographs of Mount St. Helen. Students who love facts and trivia will linger on the fold-out page of a chart that lists the Volcanic Explosivity Index. The VEI is used to rate volcanoes from the least to the most explosive.


Shaw's diagrams and illustrations will help students understand the structure and causes of volcanoes. Maps are used effectively throughout the book to provide a geographic context to readers. Stewart includes information about volcanoes in space and under the ocean. A glossary, list of web sites, and bibliography are located in the back of the book.

Inside Volcanoes should be scooped up by teachers and librarians. The book would make an excellent science resource and a high interest read for middle grade students.

Other titles in the Inside! series
Inside Hurricanes
Inside Tornadoes
Inside Earthquakes
Inside Stars
Inside Dinosaurs
Inside Butterflies
Inside Human Body
Posted by nonfictiondetectives at 7:00 AM