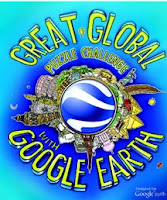 
Being an armchair traveler, when I saw a review for The Great Global Puzzle Challenge, I wanted to take a closer look. The large-size book (11 7/10 x 10 1/5 inches) of 32 pages is a basic introduction on how to use the program Google Earth and some of its features on the computer. The book is already outdated because it does not include instructions for mobile devices, such as the iphone or ipad, (I did try it with both a computer and ipad and found the computer is preferable because you have more options for the layers feature.)  Each entry is two pages that combines cartoon-like graphics, text boxes, and images taken from Google Earth.

The journey begins with “Traveling Around the World with Google Earth”.

"Have you ever wanted to go on a travel adventure around the globe? Well, set your compass for a great global puzzle challenge -- with the help from Google Earth! Explore busy cities and awesome landscapes.
Navigate your way around the planet and solve brainteasing puzzles to discover your final, top-secret destination!”

A brief explanation explains how to download, how to use the mouse controls and the “fly to” window, the navigational panel, the Look Joystick, Move Joystick, and the Zoom slider. Here is also where you learn in more details about the Puzzle Challenge! Throughout your searches armchair travelers are instructed to pick up a souvenir, spot a country's flag or emblem, spot a geographical or historic misfit (these are really hard) with the overall goal of gathering number clues that "will add up to a coordinate to your exciting final destination!"

The way it all works.
There are eleven destinations in all: London, Paris, Ancient Rome, Tokyo, Ancient Egypt, Himalayas, Great Barrier Reef, Tanzania, New York City, Amazon Rainforest, and New Delhi. To travel to these places, you type in the given coordinates. Ancient Rome and Ancient Egypt are misleading because you're not really traveling back to those times; instead you are visiting the modern place where you can still see the Colosseum or the Pyramids.

"Welcome to your first destination! London is the capital city of the
United Kingdom. It's a huge, bustling place full of historic
buildings, such as St. Paul's Cathedral and the Tower of London, and
there's plenty to do and see. Many visitors can't resist viewing the
city, like we do here, from the giant London Eye wheel standing on the
banks of the Thames…"

Once you arrive at your destination, I was reminded of the "Where's Waldo" books. The cartoon like drawings shows a busy London where you are asked to find a policeman, a London taxicab (which I could not spot) and Royal Guards on parade. You really have to look hard to find them. There are also text boxes placed throughout the drawing that point out historic buildings, give facts, a hint at the souvenir to pick up, and the number you need to record that will give you that final coordinate.

The problem with the book
Readers are expected to juggle between the book and the computer, which is really confusing and frustrating, because the maps of the cities or places are disproportionate to what you see on the computer. This was especially true when you were in Ancient Egypt. The first coordinates landed me in the middle of nowhere, not a bustling ancient city. At the Amazon Rainforest, the book shows trees, colorful birds, and the Amazon River. On the computer there is only a green landscape and your view becomes blurry the closer you zoom to eye level. However, you do need the book to find most of the clues and to uncover the "historical or geographic" misfits placed at each location. Many of the questions when trying to find the final coordinates are really hard and impossible to answer with either the book or Google Earth.

About that ultimate challenge and the numbers for you ending coordinates, there is a typo in the book. I admit, I took the easy way out and went directly to the "Puzzle Answers" found at the back of the book and typed in the coordinates they listed. The hint says, "Out of this World!" and "The two astronauts are "Buzz" Aldrin and Michael Collins." 'Oh! I bet I'm going to the Moon!", I said, but when I typed in the coordinates I ended up in the middle of Democratic Republic of the Congo! (I typed the coordinates in four times!)  Huh!

2 Stars -- Despite the above mentioned problems, this book could be an introduction on how to use Google Earth. Under adult supervision, someone who is familiar with this book's shortcomings, the combination of the book and Google Earth could be an activity for a rainy afternoon. Maybe the challenge could be to find the correct coordinates! In a school or public library the book itself could be given to those children still longing for puzzle adventures, since there is much to find within the pages of the book, yet without an adult guiding them and an encyclopedias for support for some of the questions, children will easily become overwhelmed. (The book's binding is pretty weak.)

Posted by nonfictiondetectives at 7:37 AM

Email ThisBlogThis!Share to TwitterShare to FacebookShare to Pinterest
Labels: geography