Friend Me! 600 years of social networking in America by Francesca Davis DiPiazza 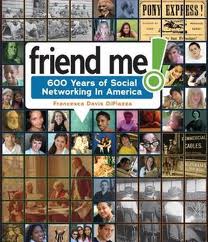 Friend Me! 600 years of Social Networking in America
By Francesca Davis DiPiazza
Twenty-First Century Books. 2012
ISBN: 9780761358695
(Grades 9 and up)
Publisher sent reviewer a copy of this book.

In Friend Me! 600 years of Social Networking in America Francesca Davis DiPiazza states, “Social networks are groups of people connected by common interests and needs. Kinship, friendship, and sexual partnership are some of the ties that bind social networks. Likes and dislikes weave people into networks too – from sport leagues to political protest groups to vampire fan clubs.” Americans have been connecting with each other in many different ways, for many different reasons throughout history. DiPiazza’s tour of how groups used social networking for a wide variety of needs makes for an interesting thesis.

The book is divided into eight chapters and looks at how certain inventions -- the printing press, U.S. mail service, the telegraph, and the Internet -- changed the way we connect. Chapter One, ‘A String of Beads’ tells of the origin of wampum, and how it helped the warring Iroquois nation to grow stronger. Social networking both strengthened and divided the Puritan community, as we read in Chapter Two, ‘The Knitted City : Puritan New England’.  Chapter Three, ‘Coffee and Conversation: a Notion of Freedom’ discusses how printing during the 1600’s helped band American settlers and allow them the freedom of speech that would eventually lead to the revolution that separated the colonists from Great Britain rule.

As the population grew in numbers, social networking united the slaves as we read in Chapter Four, ‘People Skills: Creating Community in Slavery. Chapter Five, ‘A Very Social Time: Networking in a New Nation, songs and ballads, and letters all helped to unite people during the 1800’s, a time in U.S. history of tremendous growth as settles moved farther west.

The Telegraph changed the speed in which information was passed, we learn in Chapter Six, ‘Wired! Love, Death, and the Telegraph’. Chapter Seven, ‘A Smaller World Connecting the Dots’, the telegraph, the railroad, and the U.S. mail drastically changed the focus of social networking in the 1900’s. Chapter Eight, ‘Hardwired From Earth to the Stars’ shows how the Internet has expanded up our opportunities to make connections.

The book is only 112 pages, yet it covers a lot of information. It includes source notes, selected bibliography, further reading and websites, and an index. I did enjoy reading it and found it gave me a different perspective on American history.  I never really thought about how the mail order catalogs in 1905 were like Amazon in that they both threatened the small, independent, local retailer.

This book would work best in a social studies class for high school or college.
Posted by nonfictiondetectives at 6:21 AM