Mrs. Harkness and the Panda by Alicia Potter 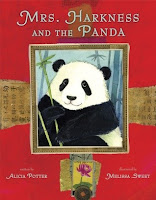 Some nonfiction books can be a hard sell to kids. I create display and booktalk lots of nonfiction books each week to get kids interested. Put a dolphin, a penguin or a panda on the cover of the nonfiction book, and the book sells itself. Kids love animal stories, and for some reason certain animals (like pandas) create a frenzy in the library.

So I knew Alicia Potter's new nonfiction picture book would be a popular read with my patrons; it has a panda on the cover and in the title. However, Mrs. Harkness and the Panda is much more than an animal story. It's really the story of one woman's determination and courage, and it's a perfect book to read during Women's History Month.

In 1934, William Harkness set off on an expedition to China to capture a panda and bring it back to the United States. William's wife, Ruth, stayed at home in New York City where she designed dresses. It was not socially acceptable for a woman to go off exploring in the 1930s. When Ruth got word that her husband had passed away in China, she decided to finish what he had started. She would travel to China and bring back a panda, and that is exactly what she did.

Melissa Sweet's watercolor and mixed media illustrations are amazing and work perfectly with Potter's text. Sweet created a collage using a world map, postcards, and watercolor illustrations of a steam ship to illustrate Mrs. Harkness' voyage to China. Bright red and pink paint on a background of Chinese characters depict the expedition's journey on the Yangtze River. On one page, Mrs. Harkness hears a sound in the trees. Upon turning the page, the black and white face of a baby panda peers out of a tree. There are only three words on the page, "A baby panda!" Kids will be captivated. I found myself flipping back so that I could experience the "wow" of the page turn again.

The panda, Su Lin, was brought to the Brookfield Zoo in Chicago, and Mrs. Harkness had become a female explorer. I have to admit, I had an uneasy feeling at the end of the story. Why are we celebrating the capture of a wild animal? It seemed wrong to me, and then I read the author's note. Potter points out that in 1934 most people had never seen a panda. By bringing the panda to the United States, scientists could study the animal and people could learn more about the species and how to protect it. "Harkness introduced the world to a tubby, bamboo-chomping ambassador."
Posted by nonfictiondetectives at 12:01 AM