The Plant Hunters by Anita Silvey 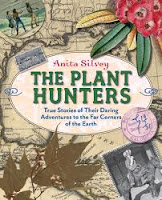 The Plant Hunters: True Stories of Their Daring Adventures to the Far Corners of the Earth
by Anita Silvey
FSG. 2012
ISBN: 9780374309084
Grade 3- 7
This reviewer obtained an advanced reader's copy from the author.

Children love Indiana Jones, especially his death-defying escapades in far-off places in his search of ancient treasure. But once a child has made their way through the entire Indiana Jones Omnibus, what’s next? I recommend The Plant Hunters: True Stories of their Daring Adventures to the Far Corners of the Earth by Anita Silvey. The engaging text and story of greed and obsessions will definitely hook readers.

Anita Silvey has had a long career championing great books for children. As editor-in- chief of The Horn Book Magazine (1985 – 1995) and vice-president of Houghton Mifflin (1995-2001), Silvey has been vocal about sharing her belief that books for children and young adults should be the very best. She authors a blog, Book-a-Day Almanac, that promotes the best of the old and new in children’s literature.

In The Plant Hunters, Silvey writes about a little known occupation where men risked their lives in search of exotic plants. There have been plant hunters as far back as Queen Hatshepsut of ancient Egypt. The queen dispatched a convoy to bring frankincense trees from the ancient Land of Punt, in Africa. We know that in the US, Thomas Jefferson sent his plant hunters, Meriwether Lewis and William Clark out west looking for new species.

Plant Hunters shared similar characteristics. “They love being outdoors in the natural world. They enjoyed traveling to places often unseen by others, and they found alien landscapes mysterious and beautiful.” They also need to posses stamina, endurance, and perseverance, speak several languages, along with a temperament that flourished in isolation. Mostly a male dominated occupation, Silvey does include the few women who made their mark.

Plant collecting was an environmental nightmare. Plant hunters would collect hundreds, even thousands of seeds and seedlings, often completely destroying their original habitat. In one instance, while gathering a particular orchid, entire tree would be cut down just to secure the orchids living at the top. “Ten thousand trees might die before they gathered four thousand orchids. And then, the journey back might be fraught with mishaps causing over half of the seeds or plants collected to die.

Silvey points out that though part of the motivation was to become rich, the adventurers also helped save lives by making more widely available certain plants or trees that had medicinal properties. Silvey states, “Some plants contained medicine that could help save lives. But even these plants could be protected by the country where they originated.” In mid-1700, the scientist Linnaeus discovered information about a South American tree whose bark provided a cure for malaria. (Quinine) Named by Linnaeus, the cinchona tree was guarded by South American natives.

In 1860, plant hunter Richard Spruce was asked by Joseph Hooker, director of Kew Gardens in England, to bring back as many cinchona seeds or seedlings as possible, he traveled deep into dense jungles in search of the valuable Cinchona tree. Spruce battled weather, jungles, Ecuadorian soldiers, and much more. Fortunately, enough seedlings survived to help establish a large cinchona plantation in Ceylon and India, making quinine available worldwide.

The book is filled with many black & white or color prints. (click here to see a sampling) Readers will really like seeing the photos of the people and the places they traveled. All the captions explain the picture and are placed alongside the appropriate text.

This is a fine book that ends with a look at a modern-day plant hunter, Richard H. Ree.

This is a good book to add to any display about plants, gardening,
botany, adventurers. and even for Earth Day.
Posted by Louise at 5:32 AM

Email ThisBlogThis!Share to TwitterShare to FacebookShare to Pinterest
Labels: Adventure