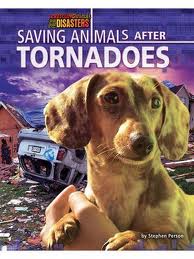 Saving Animals after Tornadoes written by Stephen Person is another title in the Rescuing Animals from Disaster series by Bearport. The seven books in the series look at how people work to save animals from disasters, such as earthquakes, floods, fires, hurricanes, volcanoes, and oil spills.

This book focuses on the Super Outbreak of Tornadoes that struck 15 different states – from Mississippi all the way to New York, between April 26 and April 28, 2011. Many animals were separated from their owners for different reasons. The powerful winds carried some animals far from home, others were trapped in debris, and many were left alone when their owners died during the storm. However it happened, the animals needed to be found to receive medical attention, food, water, and shelter. Readers are told that some animals were reunited with their families, while others would be adopted.

The fast-paced writing is exciting.  The abundant color photos are well captioned and show animals in the arms of their rescuers. Very emotional.  A glossary, bibliography, and suggestions for further reading are included.

This is a good series for animal lovers. 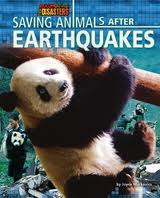 Posted by nonfictiondetectives at 8:44 PM

Email ThisBlogThis!Share to TwitterShare to FacebookShare to Pinterest
Labels: animals