We've Got a Job 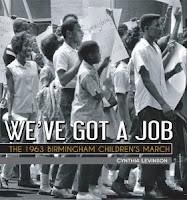 
The reviewer received an advanced reader's copy of the book from the publisher.

When I think of children who were active in the civil rights movement, Ruby Bridges and the Little Rock Nine come to mind right away.  Four children, Audrey Hendricks, Washington Booker, James Stewart, and Arnetta Streeter, were unknown to me until I opened Cynthia Levinson's well-researched book, We've Got a Job: The 1963 Birmingham Children's March.

In 1963 racial tension had escalated in Birmingham. The city had closed its public pools and parks to avoid integration ordered by the federal courts. Reverend Fred Shuttlesworth led protests in downtown Birmingham and enlisted the help of college students to start a selective buying campaign. African Americans were discouraged from buying clothes or eating lunch at department stores and restaurants that had segregated lunch counters, restrooms & fitting rooms. Shuttlesworth asked Dr. Martin Luther King, Jr. and Reverend Andrew Young to meet with black leaders in Birmingham in 1963. The leaders devised a strategy to bring an end to segregation in Birmingham. They would flood the city's jails with protesters bringing attention to the injustices faced by African Americans and also putting a strain on city services.

In an effort to gather thousands of protesters, King and Shuttlesworth mobilized students including Booker, Stewart, Streeter and Hendricks, all high school students with the exception of Hendricks who was just nine years old at the time. During the months of April and May, student protestors marched through the streets of Birmingham despite threats and aggressive tactics by commissioner of public safety, Bull Connor.

Levinson follows the four students as they took part in the children's march. Led by James Bevel and Shuttlesworth, students reported to school then took to the streets to march in protest on May 2, 1963.
As police filled paddy wagons and buses with arrested students, more students took to the streets. The following day nearly 2,000 students protested in the streets again. Police turned water hoses and dogs onto the peaceful, young protestors before transporting them to jail. Readers will be shocked to read about the filthy and cramped conditions of the jails. Once out of jail, high school students who missed school to take part in protests were expelled from school. In the end, the children's march had a major impact on integrating Birmingham.

The design of the book is quite effective. Told in chronological order, dates are listed on subheadings throughout the chapters. The numerous black and white photographs will interest readers. Powerful photographs show students behind bars in paddy wagons, violently sprayed with water hoses, and attacked by police dogs.

Levinson's research is impressive. In addition to interviewing Hendricks, Booker, Stewart and Streeter, she conducted dozens of other interviews, read newspaper accounts and many nonfiction texts. Sources notes are organized by chapter. A timeline of events, map of Birmingham, and extensive bibliography are included at the end of the book. We've Got a Job is an empowering read for students interested in learning more about our country's history, and it would make an excellent nonfiction read aloud for upper elementary and middle schools classes. Pair this book with We Were There, Too! by Phillip Hoose.

Today is Nonfiction Monday.
Head over to Gathering Books to see the reviews: http://main.gatheringbooks.org/
Posted by Cathy at 6:15 AM