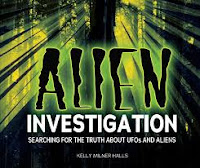 Alien Investigations: searching for the truth about UFO’s and aliens
By Kelly Milner Halls
Millbrook Press. 2012
ISBN: 9789761362043
Grades 5 and up
This reviewer received a copy of the book from the publisher.

Do you believe that aliens, extraterrestrials, have visited Earth? I would not rule out the possibility. Neither would Kelly Milner Halls, author of Alien Investigation: Searching for the Truth about UFO’s and Aliens. Halls suggests there is a strong possibility based on first-hand accounts by individuals who swear they saw something in the night sky.

Halls divides the book into four chapters: The Spacecraft, Crashes and Landings, The Aliens, and Hoaxes and Misunderstandings. I found it fascinating just how many UFO sightings there have been since the first one was recorded in 1947. Though most are from the United States, again, I was surprised to learn that there have also been sightings all around the world.

The book’s design will appeal to avid UFO fans, as it uses a combination of drawings, computer generated art, as well as historic black & white and color photographs to show the variety of unexplainable shapes seen by eyewitnesses. Interspersed throughout are interviews with people who have witnessed a UFO sighting, a person who studies the likelihood of life on other planets, and Michael Schratt who, in his spare time is an expert on something called black programs. “Those are top secret projects world governments prefer to keep top secret.”

The book is a combination of fact and a bit of fiction. For example, at the beginning of each chapter, readers are asked to imagine “a team of bold alien explorers as they prepare to leave their home planet” to investigate a distant blue planet. In this made-up scenario, the travelers reach Earth and, instead of being captured by our military, they meet a young earthling “who shares everything in his pockets.” After the positive exchange, the aliens head back to their home planet pleased with their encounter and hopeful for another visit.

Pair this with Gloria Skurzynski’s 2004 title, Are We Alone? : Scientists
Search for Life in Space and Looking for Life in the Universe by Ellen Jackson, a 2002 Scientist in the Field entry.

Have you ever seen a UFO?