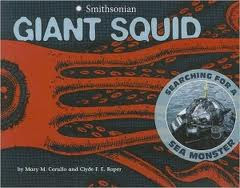 The publisher sent this reviewer a copy of this book.

Giant Squids! They are right up there with Sasquatch, the Loch Ness Monster, and the Yeti as being mysterious, yet so very popular. Children read about them year after year wondering if they really exist. Adults spend their whole lives looking for them. What is so darn attractive about them? Words I overhear children saying as they discuss these creatures include elusive, mystifying, scary, and “way cool”. I also hear the word MORE, as in “give us more books about these awesome creatures.”

Named kraken by long ago sailors and storytellers, the giant squid has been talked about for centuries. The writer Jules Verne, after reading a newspaper account in 1874, included the “creature of colossal size” in his book, Twenty Thousand Leagues Under the Sea, where it attacked Captain Nemo and the crew of the Nautilus.

Ceruillo starts the book with historic reports from sailors and fishermen who claim to have had run-ins with a spiderlike creature as big as an island.” She keeps the tension throughout as decade-by-decade brave souls attempt to find out the truth: Is there really a Giant Squid!

What was most appealing, was following the work of Clyde F. E. Roper, now retired from the Smithsonian Institution’s Museum of Natural History in Washington, D.C. From a young boy with an interest in snails to an adult where he decided to “dedicate himself to studying this secretive squid that scientists knew so little about.”

The writing is engaging and perfect for reluctant readers. Cerullo keeps the excitement building throughout until finally, in 2007, Japanese scientist, Tsunemi Kubodera, PhD. caught a giant squid off the coast of Japan.

In addition to the text the book is packed with historic engravings, drawings, and color photographs. Readers will appreciate the glossary, suggestions for further reading, a note from the authors, and the index.

A fine example of science books for children.