The Beetle Book by Steve Jenkins 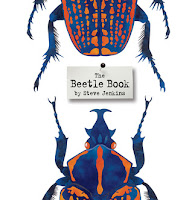 
The reviewer obtained a copy of the book from her local library.

He's done it again. Steve Jenkins has created another amazing book that will capture the attention of young readers, and this one will make some readers say, "eeww." This time Jenkins focuses his attention on beetles; he points out that out of all living plants and animals on earth, "one in every four will be a beetle."

Using his signature cut-paper collage, Jenkins illustrates beetles of different sizes, shapes and species. Readers will want to linger on the double-page spread that shows a line-up of twelve different kinds of beetles. The red and blue body of the flat-faced longhorn beetle stands out against the white page as its long black antennae curve all the way down the length of its body. The antennae of the cedar beetle resemble the needles of a tree.

Each illustration is accompanied by a detailed caption containing interesting facts about the species. Readers will learn that the yellow spikes growing on the body of the African jewel beetle are actually tufts of hair to scare off predators. The mole beetle uses its legs to dig dirt like a mole. The mottled tortoise beetle protects itself by hiding its head and legs under its body. A number of illustrations are much larger than the actual insects; Jenkins uses silhouettes of the beetles to show their actual size. I can envision groups of children in my library huddled around the book "oohing" and "ahhing" over the intricate illustrations and fascinating scientific information.

An index listing the types of beetles shown on each page will be of interest to budding entomologists. The book is lacking a list of sources or related books for readers who want more on the topic.
Posted by Cathy at 7:10 AM