Becoming Ben Franklin: how a candle-maker’s son helped light the flame of liberty
by Russell Freedman 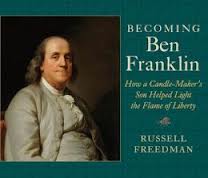 Benjamin Franklin was born in colonial Boston on January 17, 1706.

We remember him as a printer, editor, and publisher; a community organizer; a scientist and inventor; a statesman, humorist, and philosopher; and an influential writer. His contributions to society include a library, a university, a fire company, a philosophical society, the lightning rod, the Franklin stove, and bifocal glasses. And he helped give birth to a new kind of nation, ruled not by a hereditary monarch but by “We, the People".

In Becoming Ben Franklin, the award-winning Russell Freedman, himself considered one of our most significant writers of juvenile nonfiction, has penned a moving account of the life of one, if not the, greatest American.

We read about Franklin and how, in 1723, at age seventeen, he ran away from home to live in Philadelphia. In 1728, he opens his own printing shop with a partner and at the age of 27, published the first copy of Poor Richard’s Almanack, a publication that was widely popular and which allowed him, in 1748 at age 42, to retire.

After retiring Ben Franklin would spend the rest of his life, when not inventing something, a busy man.  The public, now considering me a man of leisure would appoint him to various position in the civil government.

Franklin was a faithful British subject, until a series of taxes (No Taxation without Representation!) changed his mind, making him one of the most outspoken advocates of the American Revolution. He was happily married for forty-five years, had three children and was a loving and attentive grandfather. During his later years, after signing of the Constitution of the United States, Franklin devoted the rest of his life attempting to eliminate slavery.

Freedman incorporates Franklin’s own words, whenever possible, throughout the narrative which allows Franklin to tell most of his own story. The book’s design places historic photos and engravings on every page including Franklin’s drawing considered to be America’s earliest original political cartoon.

Freedman excels at making history accessible and interesting for readers. This book has a timeline, source notes, picture credits, selected bibliography, and index.

Read our review of Freedman's The Boston Tea Party
Posted by Louise at 5:00 AM