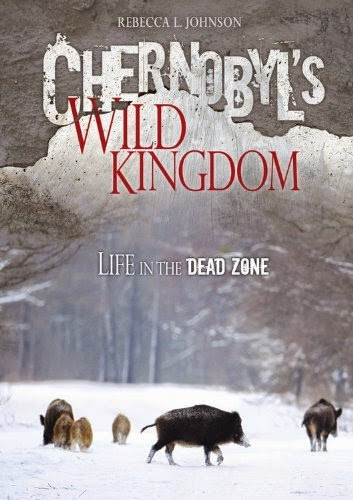 On April 26, 1986, Reactor Number 4 at the Chernobyl Nuclear Power Plant exploded sending extremely high levels of ionizing radiation into the atmosphere that would cover the area. Liquidators worked to clean up the mess. In the countryside around the power plant, the top inches of radioactive soil, placed in steel drums were then buried deep in the ground. When as much as could be done cleaning up, an 18.6 miles radius (30 km) was set around the power plant and fenced off. This would be known as the Exclusion Zone.

Most people, including many scientists, assumed that Chernobyl’s Exclusion Zone would become a barren wasteland –an empty, lifeless landscape like something from a science fiction story about the end of the world. But that’s not what happened. To almost everyone’s surprise, life in the Zone wasn’t extinguished at all.

Similar in scope and quality to the Scientists in the Field series, yet written for a younger audience, science writer, Rebecca Johnson, follows the work of four scientists who have been studying the various life forms that inhabit the Exclusion Zone, also known as the Dead Zone for the past twenty-five years. Whereas mammals seem to have little mutations to their DNA from the radiation, Barn swallows(birds) and insects seem to be more affected. Why that is has yet to be determined.

The information these scientists discovered would be invaluable to Japan when, in March of 2011 there was another nuclear disaster at the Fukushima Daiichi nuclear power plant in Japan.

Learning how radiation affects plants and animals is crucial, because however it affects them is also how it will affect us.

In 2013, around the globe there are 423 electricity-generating nuclear reactors in operation, according to the World Nuclear Association, with the United States having the most.

The more we know, the better prepared we will be before the next accident—which may happen sooner than we think.

Color photographs are placed throughout, as are sidebars that offer more details on topics mentioned in the text. Back matter includes an author’s note, glossary, source notes and selected bibliography and a table of contents and index.

An excellent addition to nonfiction collections.

Watch a short film with biologist Timothy Mousseau on the animals of Chernobyl by the New York Times.
Posted by Louise at 5:00 AM