Winnie: the true story of the bear who inspired Winnie-the-Pooh by Sally M. Walker


Winnie: the true story of the bear who inspired Winnie-the-Pooh 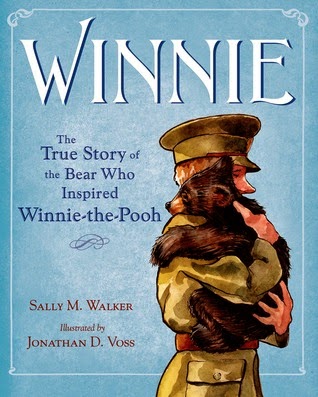 Children the world over have been loving the adventures of A. A. Milne’s beloved bear Winnie-the-Pooh since it was published in 1926. Sally Walker tells the story of the real bear who inspired Milne’s classic tale in this informational picture book.

It all began in Canada. Harry Coleburn, a young lieutenant in the Canadian Army Veterinary Corps, looked out of the train window, he couldn’t believe what he saw: a bear at the station! It was a cub and Harry bought it for $20. Harry named the bear Winnipeg, after our company’s hometown. By the time Harry and the trainload of soldiers reached their military training camp in Quebec, Winnipeg had been shortened to Winnie.

Jonathan Voss’ watercolor illustrations, rendered with pen and ink on Arches Hot Press Watercolor Board support the text of this remarkable bear as he goes from Canada to England. Under Harry’s care Winnie thrived and was so gentle that he became a playmate of the other soldiers. When Harry’s regiment was sent to France, Harry made a difficult decision to place Winnie at the London Zoo. It was during a visit to the London Zoo that A. A. Milne's son, Christopher Robin met Winnie...and the rest is history.

The writing is simple and accessible. Walker includes an author’s note, sources and websites.

Share Winnie, the true story of the bear who inspired Winnie-the-Pooh with students in all grades. They will enjoy learning all about this remarkable bear and the veterinary who raised him.

Go here and at about two minutes and forty seconds you will see Winnie.