Stonewall: Breaking Out in the Fight for Gay Rights 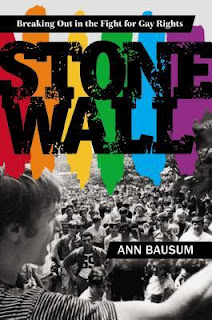 Ann Bausum is known for writing nonfiction books about civil rights and social justice. Her latest book for teens, Stonewall: Breaking Out in the Fight for Gay Rights, describes how the Stonewall riots were a turning point for the gay rights movement in America.

Bausum writes in a narrative style and provides readers with historical context as she describes what it was like to be gay in the 1960s. There were dangers to being openly gay: losing your job, being ostracized by your family, being labeled mentally ill by the medical community and being targeted or arrested by law enforcement.

"Those who resisted the path of suicide- or tried it and survived- did their best to bear the weight of oppression and the self-imposed silence that often accompanied same-sex preferences. This very anonymity made it that much harder to fight back against injustices. If you remained silent and anonymous, how could you fight your oppression?" (p. 17)

The Stonewall Inn, a gay bar run by the mafia in Greenwich Village, was one of the few safe places where gay people could go and be themselves in New York.

Despite its lack of ambiance and decor, The Stonewall Inn was constantly busy because it had music, a dance floor and allowed same-sex dancing. Because it was operated by the mafia, the police left the bar alone for the most part. That changed on the night of June 28, 1969 when a police task force was sent in to raid the establishment. As bar workers and patrons were arrested and loaded into police vehicles, the crowd rioted and fought back hurling bricks, trash cans, and bottles at the police.

Bausum builds the tension and excitement as she describes what it was like for police officers and a reporter from the Village Voice to be trapped inside the bar while thousands rioted in the streets. People even ripped up a parking meter and used it to break down the door of the bar. The following days brought more riots and protests. The Stonewall riots became a catalyst for bringing together people in the gay community and led to the organization of marches, protests and gay pride parades across the country.

"Forget the Fourth of July. The gay community had its own declaration of independence to celebrate: the one it had just made on Christopher Street in New York." (p. 74)

In chapter 9, Bausum describes the AIDS epidemic of the 1980s. The author calls out President Reagan and President Bush for not showing concern or interest in battling the deadly disease. The final chapter of the book ends on an optimistic note as the author highlights progress the gay rights movement has made over the past few decades including the legalization of gay marriage.

The use of quotes and detailed descriptions of events, places and people bring the story to life. The book contains some black and white photographs, but Bausum explains there were few photos from the riots because they were not covered by the most mainstream media outlets. Bausum's research for the book is impressive; a five page bibliography, source notes, and an author's note are part of the back matter.

Stonewall: Breaking Out in the Fight for Gay Rights is a powerful and important book about pivotal social justice events that few teens may know about. The book deserves a place in high school and public libraries. I hope in the not too distant future biographies for teens are published about Craig Rodwell, Barbara Gittings, Harvey Milk and other leaders in the gay rights movement.

Visit the publisher's site to read an excerpt from the book.
Posted by Cathy at 4:12 PM