Algeria is Beautiful Like American Written by Olivia Burton 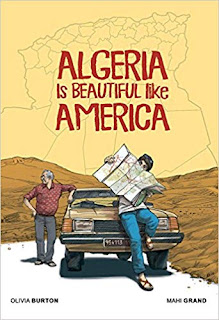 I used a copy borrowed from my local public library to write this review.

Told in comic format, this very personal book, which is part memoir, part travel journal, part history, French writer Olivia Burton travels to her family’s former homeland of Algeria with the hopes to better understand her family’s past.

Algeria is the largest country in Africa. It’s northern border stretches along the Mediterranean Sea, while the Sahara desert covers four-fifths to the south. In 1830, France colonized Algeria. In 1954, Algerians began their fight for independence from the French which they won in 1962.

Burton’s family was originally from France. They were part of the wave who emigrated to Algeria during French rule. In 1962, her family fled to France since they did not support Algeria’s independence. Yet, their homesickness for their country, its beauty and traditions, was a frequent conversation at family gatherings.

“My picture postcard image of Algeria when up in smoke when I started high school. I had an amazing history teacher and many friends, mostly from left-learning families, who introduced me to politics…because, you know, my mother never talked about it. In fact, since coming to France, she’d never even wanted to vote. And add to all of that a teenager’s natural urge to questions everything, and suddenly all of those family stories became problematic.” Burton was suddenly conflicted and questioned her family’s role during the French occupation as racist exploiters, fascists, and torturers.

What she discovers about her family and herself while visiting Algeria is the core of this captivating memoir.

French artist, Mahi Grand does an excellent job with the visual interpretation of Burton’s words. Each frame is very detailed and captures perfectly the beautiful Algerian landscape. All the drawings are black & white, except for a few in color to show that Burton is taking a photograph.

This memoir has nothing to do with America, but those who read it will, hopefully, be able to acknowledge the absurdness of hating people who are “not like me.”

There is no author's note.

By clicking here, you can visit Grand's website to see some of the illustrations.