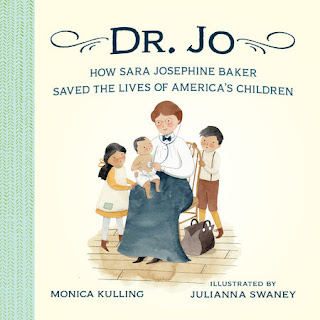 Sara Josephine Baker, nicknamed Jo, was born in Poughkeepsie, New York in 1873. She was different. She loved to play baseball, climb trees, and have adventures. She fished in the Hudson River in summers and skated on it in winter with her younger brother, Robbie. At ten years old, she decided she wanted to be a doctor after her brother and father died from typhoid, she was even more determined.

Kulling, known for her Great Idea series, has crafted a picture book biography about Sara Josephine Baker, a woman who was unwavering, despite the prejudice women faced when it came to going to college, and especially women who wanted to become doctors.

Baker was persistent, and after graduating from Women’s Medical College of the New York Infirmary, (1898), she took a job with the New York Public Health Department. Her beat, a tough west-side neighborhood called, Hell’s Kitchen. “Here, thousands of people, many of them immigrants, lived in run-down apartments. Diseases such as smallpox and typhoid fever spread like wildfire, especially among the young.” Dr. Jo made it a requirement that midwives were licensed, sent nurses to homes of new mothers with newborn children, and organized milk stations throughout the city that offered clean milk.

During her twenty-five years on the job, (becoming the director of the NYC Department of Child Hygiene in 1908), “Dr. Sara Josephine Baker had saved the lives of 90,000 inner-city children across America.”

Back matter includes more about Dr. Jo and source notes.

A fine addition to all libraries.