Trash Vortex: How Plastic Pollution is choking the World’s Oceans By Danielle Smith-Llera 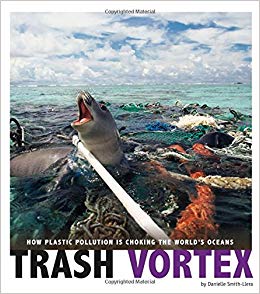 The publisher sent me a copy of this book to review.
Can a photograph change the world? That is the hope in Capstone’s Captured Science History series. Each title examines how a single moment captured on film can influence society and change the course of history.  In Trash Vortex, Smith-Llera traces the events that has made the dangers of plastic pollution in our ocean a call to action.

On August 8, 1997, while Captain Charles Moore was sailing across the on the Pacific Ocean, he saw something unexpected. “Here and there, odd bits and flakes speckled the ocean’s surface. He was disturbed because the objects were plastic. He said it looked as if “a giant salt shaker has sprinkled bits of plastic onto the surface of the ocean.”   When Moore returned to the Pacific in 1999, he used fine-meshed nets and skimmed the ocean’s surface. In addition to finding plankton, the tiny organisms many marine animals eat, Moore discovered that there was not one net that was free of plastic.

Smith-Llera provides a history of plastics and how our dependency on this synthetic material has grown since the 1930’s when it was used for home insulation, threads for nylon stockings and toothbrush bristles. Throughout the narrative the disastrous environmental impact throughout the world is well explained and the reasons behind laws that were past to regulate water pollution, including the Clean Water Act of 1972.

“Plastic becomes a link in the gyre’s food chain. Moore once found a 2.5 inch (6.4-cm) fish with 84 plastic pieces inside its belly.”

Color photos give a powerful visual to what is being explained in the text.

Back matter includes a timeline on the history of plastic, glossary, source notes, selected bibliography, titles for additional reading, glossary and index. Because this series supports the curriculum, there are critical thinking questions added.

Include these other books on plastic pollution: All thatTrash by Meghan McCarthy, Plastic Ahoy by Patricia Newman, Trash Revolution by Erica Fyvie, and Tracking Trash by Loree Griffin Burns. Introduce this book to students who love Flush by Carl Hiaasen,
Posted by Louise at 7:25 PM

Email ThisBlogThis!Share to TwitterShare to FacebookShare to Pinterest
Labels: environment