Two books on the Stonewall Riots 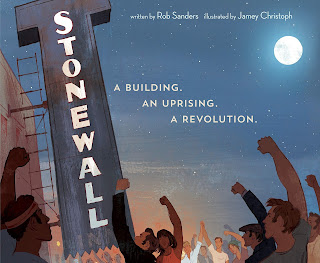 Stonewall: A building. An uprising. A revolution
Written by Rob Sanders; Illustrated by Jamey Christoph
Random House. 2019
Grades 4 up

In this informational picture book, Sanders tells the story of the powerful uprising of what would become the LGTQ+ movement.

The Stonewall Inn narrates how it went from a horse stable in 1840, to a restaurant called Bonne's Stone Wall in 1930. The Village became a creative center for New York City. "Leading up to the 1960's, our neighborhood welcomed gays and lesbians - men who loved men, and women who loved women. We were a home for people who were told they didn't fit in or belong."

Back matter includes a history of the Stonewall Inn, and an interview with Martin Boyce, a Stonewall uprising Participant and LGBTQ+ Activiist.

The Stonewall Riots: Coming Out in the Streets
by Gayle E. Pitman 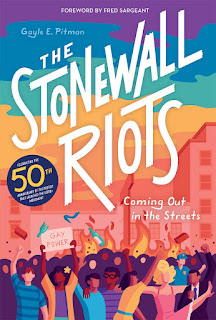 Abrams Books for Young Readers. 2019
Grades 6 and up

Pitman traces the history of the LGBTQ+ movement in America and the event that would propel gay politics into mainstream media. The Stonewall Riot happened on June 28, 1969 at the Stonewall Inn, a gay bar, in Greenwich Village, New York City.

Pitman, a professor of psychology and women and gender studies at Sacramento City College, is meticulous in her research. She expertly weaves into the narrative the unjust discrimination against homosexuals and how everything came to a head that fateful night. As a way to humiliate gays and lesbians, police would routinely raid gay bars. The names of those arrested would be placed in the local newspaper insuring the victims would face further humiliation in their communities.

Back matter includes a timeline, source notes, a bibliography, and index.

The perspective in which Pitman explains events leading up to the Stonewall Riots makes this book an important addition to libraries, yet be aware there are a few minor flaws. There is a lack of captions on photos, and sometimes those photos are placed before they are discussed in the text, thus causing some confusion. Another major blunder is on the inside jacket flap; the date listed for the riots is June 28, 1968. Oops!

It’s the 50th anniversary of the Stonewall Riot. This book will offer another perspective of the history of the LGBTQ+ movement.

I borrowed copies of these books from my local public library to write this review.