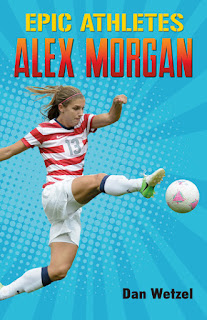 The US women's national soccer team has been dominating the World Cup in in France this month. A new series of sports nonfiction has been released just in time for kids who want to learn more about the life of soccer player, Alex Morgan.

The Epic Athletes series combines exciting narrative with comic book-style illustrations. Readers will discover how Morgan became interested in playing soccer and what her middle school and high school years were like on the field and at home. Dan Wetzel also uses quotes and Tweets from Morgan to enhance the story. Morgan went on to play soccer for UCal Berkley before earning a spot on the national team. There are many examples of Morgan overcoming injury and adversity. The book also describes Morgan's involvement in the movement demanding equal pay for female athletes. Wetzel succeeds at keeping the play-by-play soccer game parts of the book interesting and exciting. Epic Athletes: Alex Morgan will appeal to many middle grade readers including soccer fans and readers who enjoy inspirational stories.

Visit the publisher's site to read a passage from the book.

Be sure to check out other books in the Epic Athletes series including Stephen Curry, Serena Williams and Tom Brady.
Posted by Cathy at 6:00 AM