A Race Around the World by Caroline Starr Rose 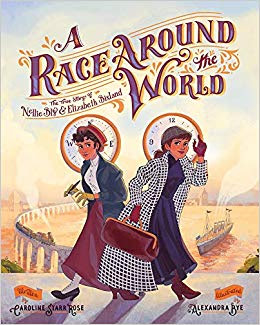 Leaving NYC harbor on November 14, 1889, twenty-five year old Nellie Bly, journalist for New York City’s World, started on her journey. The first woman to not only travel around the world, but to do it alone. The world waited to see if this gutsy journalist could accomplish this unimaginable feat.

But this story has a twist.

Also living in New York City and working as a journalist was twenty-eight year old Elizabeth Bisland, literary editor at Cosmopolitan magazine. Her assignment - leaving from San Francisco seven hours after Nellie departed from New York City harbor, Bisland was racing by train across the United States to make her connection with a ship leaving from San Francisco. Would Bisland be able to beat Nellie’s record? The whole world waited to find out.

Both women traveled roughly 28,000 miles.
Nellie made it in 72 days, 6 hours, 11 minutes, and 14 seconds. A huge crowd and a ten-cannon salute greeted her return.
And, what about Elizabeth? Her trip took 76 days. There was no fanfare or cannon salute. She came in second.
Nellie is remembered to this day for her pluck; Elizabeth is largely forgotten.

Both women accomplished something no one had ever done before.

Bye’s colorful full-page illustrations enhance the excitement of the writing.

Back matter includes an author’s note, and selected sources.
Share this with students of all ages.

To review this book, the publisher sent me an Uncorrected Proof of this book.
Posted by Louise at 5:00 AM