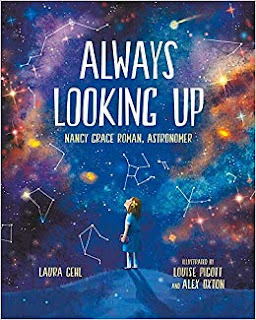 In this picture book biography, Gehl tells the true story of Nancy Grace Roman (1925-2018), the scientist responsible for putting the Hubble Telescope into orbit.

Born in 1925, despite being discouraged, Roman studied and became an astronomer. In 1959, Roman joins the newly created NASA as their Chief of Astronomy and Relativity Programs. Though Congress approved funding for the development of the Hubble Telescope, it was not launched into orbit until 1990.

The text is engaging and the digital images draw readers’ attention into the story. Back matter includes an author’s note and timeline.

A nice addition to the growing number of books that celebrate women scientists.
I used an uncorrected proof sent to me by the publisher to write this review.
Posted by Louise at 5:00 AM