Our review of Speak Up, Speak Out! by Tonya Bolden 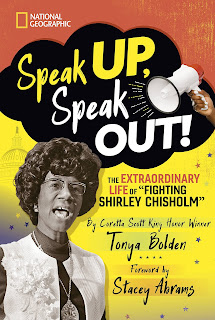 With her remarkable ability to grab readers attention at the first sentence, award-winning author, Tonya Bolden has penned another must-read biography. The subject of her latest is “Fighting Shirley Chisholm”, “the first Black woman from a major political party to run for president of the United States” in 1972. Shirley Chisholm “was the candidate of and for “the people of America,” the workaday folk who make up most of the nation.” Chisholm wanted to bring a new era into American politics. Her idea was to have an America free of poverty. Politicians to this day are struggling to find a way to make this a reality.

In nineteen chapters, Bolden traces Chisholm’s childhood and her involvement in local politics until she would become America’s first Black woman in Congress. Born Shirley “Shirls” Anita St. Hill to immigrant parents on November 30, 1924, in Brooklyn, NY, Shirls was well aware of the limited job opportunities to Black people.

Her top campaign pledges when running for congress in 1968 was:

Throughout her life, Shirls, a force, was an outspoken pioneer who shattered racial and gender barriers, who worked tirelessly for underserved communities who were ignored when it came to jobs, education, housing, and care for their children. Sworn in to office January 1969, Shirs would remain in Congress until February 1983. After which, she would teach at Mount Holyoke College, but retired from public life in 1993, siting ill health. Following several strokes, Shirley Chisholm died on January 1, 2005.

What moved me in reading Speak Up, Speak Out! was what Bolden writes in the Foreword. She states, “How we imagine ourselves in the world often depends on what we know of our past.” For me, a white woman, I believe it is my responsibility to read widely, to learn all aspects of history, especially about those who seek to divide our nation, how acts of violence are committed against others for purely selfish reasons. Power and money makes people think they have the right to take from others without so much as an apology or a reckoning. By being informed, I hope my actions work to acknowledge, apologize and then vote accordingly to ensure everyone has equal rights.

This well-researched, well-documented biography, Speak Up, Speak Out! is a must have for all libraries, school and public, and a must-read for all.

In this interview, Shirley Chisholm share about her experience as a Black woman in Congress, click here.

Posted by Louise
Posted by nonfictiondetectives at 5:00 AM