Speak Up, Speak Out! by Tonya Bolden Blog Tour 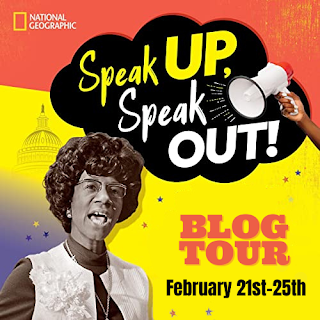 Welcome to the Speak Up, Speak Out! by Tonya Bolden Blog Tour!

To celebrate Black History Month and the release of Speak Up, Speak Out!: The Extraordinary Life of Fighting Shirley Chisholm by Tonya Bolden (January 4th), 5 blogs across the web are featuring posts from the book and author, as well as 5 chances to win!

Writing a biography of Shirley Chisholm was a natural fit for me, a native New Yorker who lived for a time as a tot on Clifton Place in Bed-Stuy, who spent her wonder years in Harlem and did the rest of her growing up in the Bronx.

What I most remember about her during those days was her clear, clipped, bold voice. I was short on details, but I knew that she was a phenomenon, a force. When she ran for president, I remember being boggled, astonished—thinking, Wow!, and feeling so proud! For a Black girl to see a Black woman embark on such an endeavor—go where no Black woman had ever gone before—how could I not feel a surge of pride?

When Shirley left Congress in 1982, though I still didn’t know all that much about her, I definitely understood that she was among the Black women who paved the way for me: for me to not hold back from any endeavor, any passion because I was Black and female.

In a way, with Speak Up, Speak Out! I’m saying, “Thank you, Shirley Chisholm!”

While researching Shirley’s extraordinary life, I discovered other Black female political trailblazers from my hometown—women who, in a way, paved the way for Shirley.

For example, there was Bed-Stuy activist Ada Jackson, known as the “Fighting Lady of Brooklyn.” In 1944, when Shirley was in college, Jackson ran (unsuccessfully) to represent the 17th AD in the New York State Assembly. She was the American Labor Party candidate, as she was when she ran again (and lost again) in 1946.

There was also the Republican Maude Richardson, co-founder of the CBCC of which Shirley was a member. Like Jackson, twice in the 1940s Richardson ran unsuccessfully to represent the 17th AD in Albany. In 1950 she became the 17th AD’s first Black co-leader.

Another example: In 1954, when Shirley was at the start of her career with Mac Holder’s Bedford-Stuyvesant Political League, former singer and dancer Bessie Buchanan, Democrat, became the first Black woman elected to the New York State Assembly, representing a district in Harlem.

Before I began work on Speak Up, Speak Out!, I knew that Shirley wasn’t the first Black person or the first woman to run for president— seeking to make that someday come. I knew, for example, of the radical white woman Victoria Woodhull, who in 1872—nearly 50 years before women had the vote nationwide—ran for president as the candidate of the Equal Rights Party (which nominated Frederick Douglass for VP, but he never accepted). I also knew about Dick Gregory, Black activist-comedian, who in 1968 was a write-in presidential candidate for the Freedom and Peace Party.

But I didn’t know about George Edwin Taylor. In 1904 this Black newspaperman and community organizer then of Ottumwa, Iowa, ran for president as the candidate of the National Negro Liberty Party (also known as the National Liberty Party).

Nor had I heard of the white woman Margaret Chase Smith, the first woman to serve in both the House of Representatives (1940-49) and the U.S. Senate (1949-1973). In 1964 Smith sought to be the Republican Party’s presidential candidate.

Exploring Shirley’s life opened me up to so much history!

But there were frustrations along the way. COVID-19 lockdowns prevented me from accessing certain material, such as all of Shirley’s papers at Brooklyn College. But I did my best to make the most of what I could access, from her memoirs and other books to digitized newspapers and immigration records to other documents. These included censuses and her beloved dad’s World War II draft registration card where I learned details like the name of the bag company for which he worked, and where he claimed that he was born not in British Guiana, but in Barbados.

Barbados: Where his dear Shirls once fed chickens and other animals, hauled water from a well, enjoyed so many hot, sunny days, stunning white-sand beaches, clear-clear turquoise water, and palm trees sent swaying by a breeze.

Barbados: Where her grandmother told her time and again, “Child, you’ve got to face things with courage.”

That is something a grown-up Shirls most certainly did. 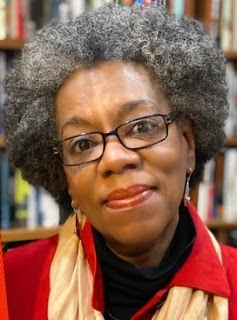 Visit the other stops on the Speak Up, Speak Out! Blog Tour

Posted by nonfictiondetectives at 5:00 AM

New comments are not allowed.