Interview with the Authors of In Harm's Way 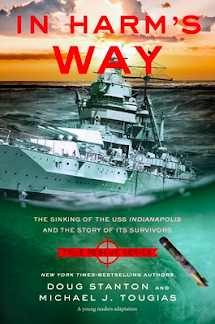 In Harm's Way: The Sinking of the USS Indianapolis and the Story of Its Survivors
A Young Readers' Adaptation
by Doug Stanton and Michael J. Tougias
Henry Holt and Co, 2022
Grades 6-12

Authors Michael J. Tougias and Doug Stanton describe the sinking of the U.S.S. Indianapolis in 1945 in the young readers' adaption of In Harm's Way. Hundreds of U.S. sailors struggled to survive in the Pacific Ocean for four days and nights in this tragic and harrowing story of survival. The book is part of Macmillan's True Rescue narrative nonfiction series.

We had the honor of interviewing Doug and Michael about the young readers' adaption of In Harm's Way.

NF Detectives: Why did you feel this particular tragic story was important to adapt for a younger audience?

Michael: I had heard about this story but only in a general way, so I was fascinated to find out there was so much I didn't know.  Young readers need to see the futility of war and the "fog" of war, but more importantly young readers would find the stories of how the survivors endured inspiring.  The sinking of the Indianapolis gives the reader a microcosm of how WWII in the Pacific was conducted.  I wanted to tell the story not just to share what happened, but do so in an exciting way to ignited the curiosity of a young reader to want to read more non-fiction.

Doug: For a long time I received emails from teachers and students who were teaching In Harm’s Way in high school history, civics, and English classes, and it was clear that the message of the book was also appealing to Young Readers. Now they have the story adapted especially for them, and it’s fabulous. Thanks to Michael Tougias, the book reads with all the complexity and insight of the original but geared especially to a new audience.

NF Detectives: Tell us about your process. How did you collaborate to adapt the story for young readers?

Michael: Doug had done a remarkable job with the research so I had everything I needed at my fingertips.  The adult book was lengthy so the first course of action was to identify areas that could be removed and get Doug's approval.  My next step was to get to work making the story as fast paced as possible, and reducing some of the background information.  Every now and then I'd shoot Doug a question.  When I had completed the first draft I submitted it to Doug and the editor.  The editor pointed out some areas that needed further explanation and other areas that could be cut. I then made the rewrite, and then Doug added his suggestions and comments along with final comments from the editor, and I now had what I needed to write the final version.

NF Detectives: How did you find the balance to not overwhelm young readers of the horrors and helplessness of the crew as it fought to survive?

Michael: In general if an incident happened several times, such as brutal shark attacks, we only needed to explain what happened once.  We tried to balance the helpless feeling of many of the survivors with other survivors who vowed they would fight on until they were either rescued or they died.  It was important to show that some of the men were unsure if they would make it out alive, but that they would use their last breath to continue to battle.

NF Detectives: Can you tell us more about the USS Indianapolis Survivors Fund Scholarship program that was founded by Doug?

Doug: What I discovered while reporting the book was that many of the survivors' families, particularly children and grandchildren, had never spoken with the survivor about their experience, which had so totally changed the course of their lives. Survivors will tell you that since their rescue, they’ve had very few bad days since then. I wondered why this was so, and answering it was the heartbeat of In Harm’s Way. Whatever knowledge the survivors had gained, like so many other veterans, like so many people who’ve suffered a trauma, I thought would be of interest to next generations.

I designed the scholarship program so that the grandchild of the survivor would interview their grandfather and write a 300 word essay and publish this in their local newspaper. This was, one generation would talk to another, and pass along the oral history, the story, for more to understand. My thinking was that the story of the USS Indianapolis would have to be carried on by future generations, and I called this building the group’s legacy. For the same reason, I suggested to the survivors that they collect their oral histories and publish them, and provide some seed money for the project, which is how they ended up self-publishing a book. There are so many stories extant in this story and in other WWII actions and it’s important that as many as possible are heard.

Thank you to Michael and Doug for taking the time to answer our questions about In Harm's Way.