Nellie VS. Elizabeth by Kate Hannigan 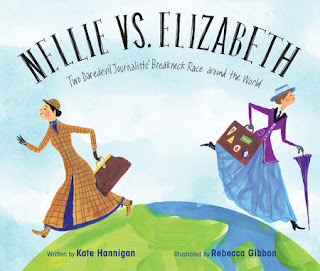 Jules Verne’s classic tale of adventure, Around the World in 80 Days, was published in the U.S. in 1873 (in France in 1872). Over the years, the novel has inspired numerous attempts to imitate Phileas Fogg’s trip around the world and beat his record. By far, the most famous is the subject of Hannigan’s informational picture book: Nellie VS. Elizabeth.

The tale recounts the race between two female journalists, Nellie Bly and Elizabeth Bisland who, in 1889, took off in different directions to try and circumnavigate the world in less than 80 days. Who would win? Both women were contemporaries, arriving in NYC in 1887.  Both women were journalists and knew first-hand the challenges of working in a male-dominated field.

Would it be Nellie? By far, the most popular of the two, Nellie was “one of the most daring stunt reporters of her time.” Nellie wrote for the New York World, a daily newspaper. Her book, Ten Days in a Mad-House caused a sensation and prompted mental health reforms.

Or, Elizabeth? A quiet person, Elizabeth wrote reviews and essays for the monthly magazine, Cosmopolitan.

The brief text is spirited and will keep readers on the edge of their seats. Gibbon’s vibrant illustrations, done in acrylic inks & colored pencil on acid-free cartridge paper, add movement and suspense to the adventure.

My only frustration is that the text was a bit too brief to allow for trip details. A map showing their route would also have been helpful. Included is an author’s note, bibliography, and a timeline listing other women investigative journalists.

A rousing tale of two women who pushed boundaries.