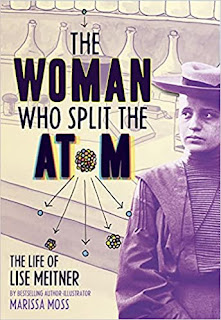 The Woman Who Split the Atom: the Life of Lise Meitner
Written and illustrated by Marissa Moss
Abrams Books for Young Readers. 2022

The Woman Who Split the Atom is the fascinating story of Lise Meitner, a Jewish female physicist working in a male dominated field, and who struggles to be recognized and honored for her ground-breaking work throughout her career. If that were not enough to make a riveting narrative, toss into the mix the rise of anti-Semitism in Hitler’s Germany. This page-turner biography propels readers into Meitner’s life making the book difficult to put down.

Lise Meitner was born in Vienna, Austria in 1878. She was the first woman to enroll at the University of Vienna in physics and the second woman in the world to earn a PhD in physics in 1906. With little job opportunities for women, but with a passion to work in her field, Meitner moves to Berlin and becomes an unpaid lab assistant at the Kaiser Wilhelm Institute (KWI). A young chemist, Dr. Otto Hahn, was eager in collaborating with Meitner after reading her one published article on radioactivity. The two would work together until 1945, when Hahn wins the Noble Prize for the discovery of nuclear fission, something that Meitner herself had discovered. The two break ties when Hahn refuses to acknowledge that it was Meitner who made the discovery.

After her discovery of nuclear fission, Moss weaves into Meitner’s story the race to build the atomic bomb. Like Einstein, Meitner, a pacifist was horrified to be associated with such a weapon of mass destruction, refused to participate.

Meitner’s story is captivating from page one as readers are drawn into the many frustrations that prevented her from receiving the recognition she deserved. Not only was she ignored by her male colleagues, she was nominated for the Noble Prize in Chemistry and Physics fourteen times, yet, never wins. With the rise of anti-Semitism during WW2 in Germany, Meitner will barely escape Berlin.

Graphic panels open every chapter, which will be a draw for graphic novel fans. Also included is an afterward, author’s note, timeline of Meitner’s life and achievements, glossary of select terms in physics, profiles of scientists mentioned throughout the book, source notes, bibliography, and index.

Click here to watch a short video on Meitner's life.