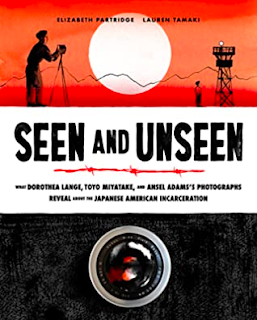 Seen and Unseen: What Dorothea Lange, Toyo Miyatake, and Ansel Adam's Photographs Reveal About the Japanese American Incarceration
by Elizabeth Partridge
illustrated by Lauren Tamaki
Chronicle Books, 2022
Grades 4 and up
Over the past few years there have been several fiction and nonfiction books published for children about the imprisonment of Japanese Americans during World War II. Seen and Unseen looks at this dark time in our country's history though the photographs of Dorothea Lange, Toyo Miyatake, and Ansel Adams.
The book begins with the bombing of Pearl Harbor followed by the U.S. government's imprisonment of Japanese Americans.  Each photographer is featured in a chapter of the book as each had different experiences documenting the internment camps in photos. The strength of the book is how well the text, illustrations and primary documents work together to give readers a close up look at life in the incarceration camps and the effects on Japanese Americans. Black and white photographs are thoughtfully placed throughout the chapters along with primary sources including newspaper clippings, signs, identification cards, and government documents.
Tamaki's ink illustrations on contrasting background colors depict the horrors of the event and the squalid conditions of the incarceration camps. Lange took many candids photos in an attempt to show the public these conditions and that innocent families were incarcerated including women and children. Adams was brought in to photographs Manzanar by the warden and had a different view from Lange. Adams's photographs were posed to show content, hardworking prisoners in hopes of shaping the public's view. Miyatake was imprisoned at Manzanar for three years and had to smuggle his camera into the incarceration camp in pieces. He secretly took photographs and developed them at night.
Several pages in the back matter provide readers with insight into the terms and language used in the book such as "incarceration" instead of "relocation," information about civil liberties and additional facts about the three photographers. Thumbnails of each photo used in the book are printed in the back matter with source information. Pair Seen and Unseen with They Call Us the Enemy by George Takei or Uprooted by Albert Marrin.
Seen and Unseen has the best layout and design I have seen recently in a children's nonfiction book. The blending of ink illustrations with photographs is effective and will capture the attention of middle grade readers. The text is broken into sections and placed around the artwork so that readers will be able to read and take in the illustrations as they progress through the book. Pages from the book can be viewed on the author's site.
Posted by Cathy at 4:00 AM