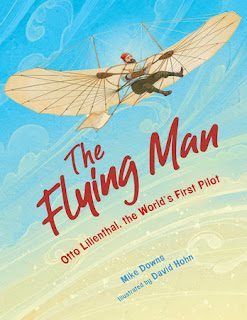 The Flying Man: Otto Lilienthal, the World's First Pilot
by Mike Downs; Illustrated by David Holm
Astra Young Readers. An Imprint of Astra Books for Young Readers. 2022
Otto Lilienthal grew up in Anklam, Germany.  At age 14, in 1862, balloons were the only way people could fly. "Scientists, teachers, and news reporters everywhere said flying was impossible." The teenage Otto wanted to prove them wrong.
In this delightful picture book biography, readers are introduced to the German aviator who, with his younger brother, Gustav, spent their free time trying to build a flying machine. Using his skills as an engineer, Otto would spend the next thirty years trying to bring his dream to fruition. Eventually, Otto would earn the title of the world's first pilot.
In the afterword, Mike Downs explains that had the Wright Brothers not read about Otto Lilienthal's achievements, they would never have invented the powered airplane.
Holm's colorful illustrations, created in digital watercolor, colored pencils and gouache and rendered in Photoshop, support the text.
Included is an afterword, and author's note. The book lacks dates, source notes, and a bibliography, yet, it will spark curiosity in young readers.
Posted by Louise at 5:00 AM